The art world’s anonymous agent provocateur known as Auguste Wibo has parachuted into Berlin with a near-impossible task: to shock and seduce a city that’s seen it all. The artist admits that Berlin was a challenge, pushing the extremities of his sculptures and materials to new heights in his latest series, “RUB IT.” It’s an arresting 3D, allsensory, cross-genre event—supported by Grindr & Amorelie — that strokes the subconscious and celebrates (or challenges) the meaning of desire in an era where sexual freedom and identity are increasingly under attack abroad. The result is a visually opulent, technically ambitious multi-room installation on a never-before-seen scale, an homage to Berlin that flips the imagery and mythology of hedonist’s heaven and elevates the city to Auguste Wibo-levels of humor and play. 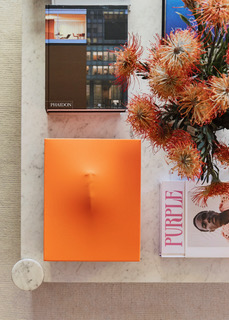 RUB IT’s elemental materials draw from the tacit dress code of Berlin nightlife—metal and vinyl, glitter and glamour, elegant evening wear and loose inhibitions. Wibo’s latest work fleshes out his original “Lovers” series and trades cloth for chrome and 12 x 9” canvases for floor-to-ceiling optical illusions that take you on a journey through new sizes and new experiences. Step inside the first room where each of the four walls encases four phallic sculpture reliefs measuring a meter-high and peeking through vinyl insets. The immersion gives new meaning to “hole in the wall.” Adonis waiters circulate poppers like perfume sticks atop antique silver trays as you progress to the throbbing chrome sculpture that mirrors viewer’s reactions to themselves—Jeff Koons this is not—and don’t forget to rub the shaft (for good luck, of course). This is Wibo’s erection of an erection, like any other public statue that holds superstition, a repository of civic memory that’s as beautiful and soft as it is brutal and hard. 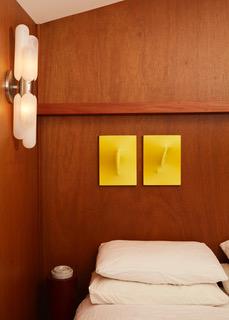 The coup de grâce (or “final blow”) arrives in a box. Step into Wibo’s darkroom where a peephole reveals one mysterious Berliner brazenly demonstrating Wibo’s very own artistic process, previously only available on OnlyFans. In this climactic shift, the curtain is finally pulled back to reveal the spoils of pleasure-seeking and access to excess. In his signature tug between intimacy and anonymity, you can look but can’t touch. And like the artist himself, the man’s face is never revealed. 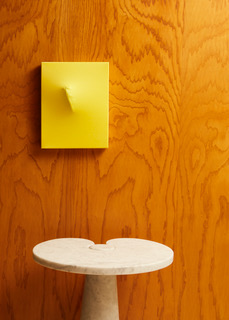 Auguste Wibo is a pseudonymous Los Angeles-based conceptual artist who may have been born in Europe. He is best known for the “Lovers” series (2021) made of real models, cast in silicone, and placed in relief behind stretched textiles. The effect is a sight gag redolent of Maurizio Cattelan or Marcel Duchamp and questions the eternal juxtaposition of sexuality and censorship. Earlier this year, he made his public debut in L.A.—the cheekily dubbed exhibit, “Double Entendre”—where his phallocentric mounted canvases adorned custom piercings by Mexican intersex jewelry designer VARON; the collaboration was celebrated for its clever homage to the staple palettes and textures of LGBTQ+ fetish iconography: metals, latex, leather, and jockstrap fabric. Playing with everyday materials, Wibo deploys self-referential humor that confronts contemporary taboos and interrogates normative structures, luxuriating in the grey matter among provocation, pleasure, beauty, and aesthetics. His work is primarily inspired by the radicalism and technique of the Arte Povera movement’s Pierro Manzoni, Fontana, and Agostino Bonalumi. He is colorblind. 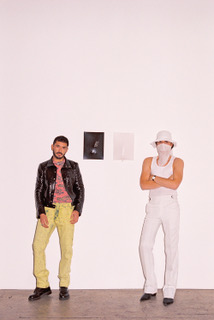